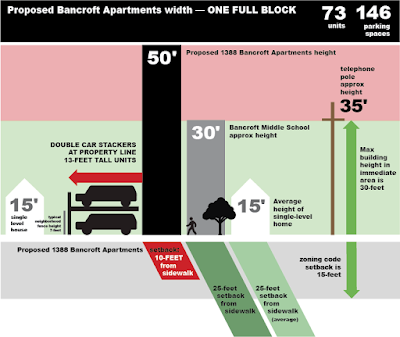 For those interested in the proposed rezoning of the parcel along Bancroft Avenue between Estudillo and Joaquin Avenues (1388 Bancroft) and plan to construct a 73-unit apartment complex, I highly recommend reading the proposed findings of fact drafted by City planners for the Planning Commission's review on Thursday night. The findings start at page five of this document: https://sanleandro.legistar.com/View.ashx?M=F&ID=5549362&GUID=BA63E52D-3CC2-4135-885C-00394863B129 The findings are devastating to the project. Here is just a sample of the findings: 1. The proposed re-zoning of the site as DA-3 property is inappropriate and inconsistent with the General Plan because the rezoning “would enable a higher and greater intensity development than designated. The DA-3 zoning designation is specified for the inner core of the Downtown rather than on the outlying and perimeter areas.” (page 5). 2. The proposed rezoning detracts from character of surrounding neighborhoods by permitting “infill development that is bulkier and more massive than the existing adjacent and immediate homes which would not be compatible nor would it maintain the aesthetics of the neighborhood.” (page 6) 3. The proposed rezoning “would not respect an appropriate density transition. It would enable an abrupt change from the existing low density housing . . .” (page 6) 4. The proposed rezoning “would reduce the required setback requirements . . . from 15 feet to 10 feet . . . [increasing] the appearance of bulkiness and massiveness of the apartment building.” (page 6) 5. The proposed rezoning “would enable multi-family proposal with a parking requirement less than current requirement at a higher parking ratio, resulting in a shortage of adequate parking” which would negatively affect the immediate neighborhood with overflow parking on the adjacent streets. 6. The 13 foot tall fence along eastern side of property “would be out of scale and detract from the character of the single-family homes, where the maximum height of residential fencing is a maximum of seven feet tall . . .” (page 7) 7. The proposed rezoning “would enable a reduced open space requirement in an area not intended for the City’s highest density urban development.” (page 8) 8. The proposed rezoning “would result in development of bulky, large and tall building that would detract and interrupt the architectural character of the existing single-family development.” (page 9) 9. “The placement of outdoor parking stackers adjacent to single family homes presents an audible and visual public nuisance.” (page 10) 10. “The placement of the proposed building, wall, and parking stackers result in altering access to sunlight and views of the sky, detrimental to properties in the vicinity.” (page 10) 11. The proposed project is “outside the limit of a qualifying radius” for the Downtown San Leandro Transit Oriented Development Strategy. (page 10) 12. “The project would exceed the allowable density and would be deficient in open space, parking, and in minimum setback requirements from the current P Profession Office District.” (page 11) 13. “[T]he project density of 58 units per acre would exceed the maximum allowable requirement of 24 units per acre. The 47 to 53 feet height would exceed the P District requirement that permits a maximum height of 30 feet.” (page 11) 14. “With its exceedances of maximum requirements, its shortfall of minimum requirements and with its physical impacts due to its bulky and large size, the project plan is too intensive and overdevelops the property . . .” (page 11) The Planning Commission does not need to agree with every factual finding proposed by City staff. As long as the Planning Commission concludes that substantial evidence exists for one, independent factual finding that supports maintaining the current zoning designation for the property then the Commission should vote to deny the rezoning of 1388 Bancroft Avenue. I can only guess at the amount of time and energy City staff have put into the analysis and review, and consequently the expenditure of our tax dollars, of this project. But it is safe to say it has been extensive. This has gone on for two years. I truly hope that the developer will cease trying to shove a square peg into a circular hole so to speak. Please come back with a project that fits our zoning code or sell the property to another developer who is willing to work within the rules.
Bancroft Development Zoning Code

Popular posts from this blog

In Support of New Housing In Downtown San Leandro: The Centro Callan Project 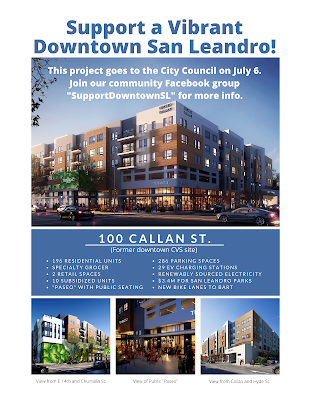 For nearly a decade, a key section of downtown San Leandro has sat vacant and become an eyesore. I am speaking of the northeast property at the intersection of East 14th Street and Davis/Callan Streets that used to have a CVS drugstore.   Now an exciting new development, called Centro Callan, has been proposed for the site, which is in the heart of the city’s Transit Oriented Development Plan. Centro Callan will bring needed new housing to San Leandro, nearly 200 units, plus a specialty grocer (likely Sprouts) and two other retail establishments.  Centro Callan will be an environmentally sustainable project with an all-electric HVAC system and rooftop solar. The project will also generate $26 million in taxes and fees, including $3.4 million in funds for San Leandro parks.    The San Leandro Board of Zoning Adjustments approved the project. No further hurdles would have to be overcome for Centro Callan but for a group of construction unions that has appealed the project to the San Lean
Read more 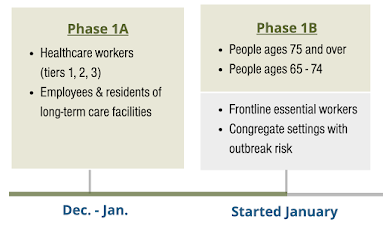 •  Alameda County is currently vaccinating health care workers and residents of long-term care facilities, and will move on to individuals 65 and older and frontline essential workers soon. People can fill out  this form  to be notified when it’s their turn. The county’s latest update on vaccine eligibility says: “For those who are age 65 and older and are interested in getting vaccinated, we encourage you to please reach out to your health care provider to see if they have vaccine available at this time. Otherwise, we anticipate being able to start vaccinating this group in the coming weeks.” •  Contra Costa County : This  online form  currently allows health care workers and individuals 65 and older to request vaccination appointments. •  San Francisco : The public health department and private providers — including UCSF, Kaiser and Sutter — will help open the city’s first  mass vaccination site  at City College on Ocean Avenue near Interstate 280 today. Those eligible for a vaccine
Read more 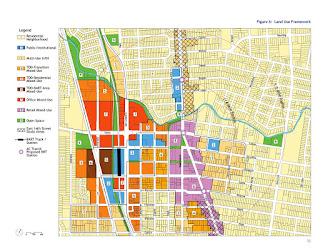 We need to have a community conversation on the degree of development that should be permitted outside of San Leandro’s downtown.  Specifically, should buildings appropriate for our downtown be built next to residential neighborhoods? For context, in 2007, after a multi-year process with extensive public input, the City Council adopted a Transit Oriented Development (“TOD”) Plan to "guide new development in downtown San Leandro for the next 20 to 30 years."  The plan’s objective is to channel the majority of new residential growth to downtown San Leandro, within walking distance of BART, thereby lessening residents’ dependence on cars. As shown in this map at page 35 of the TOD Plan, a buffer of lower density professional, commercial and multi-unit housing was created between downtown San Leandro and the residential neighborhoods on the northeast side of the city.   The buffer is reflected in the City's current zoning code (below).  Dense development, ma
Read more